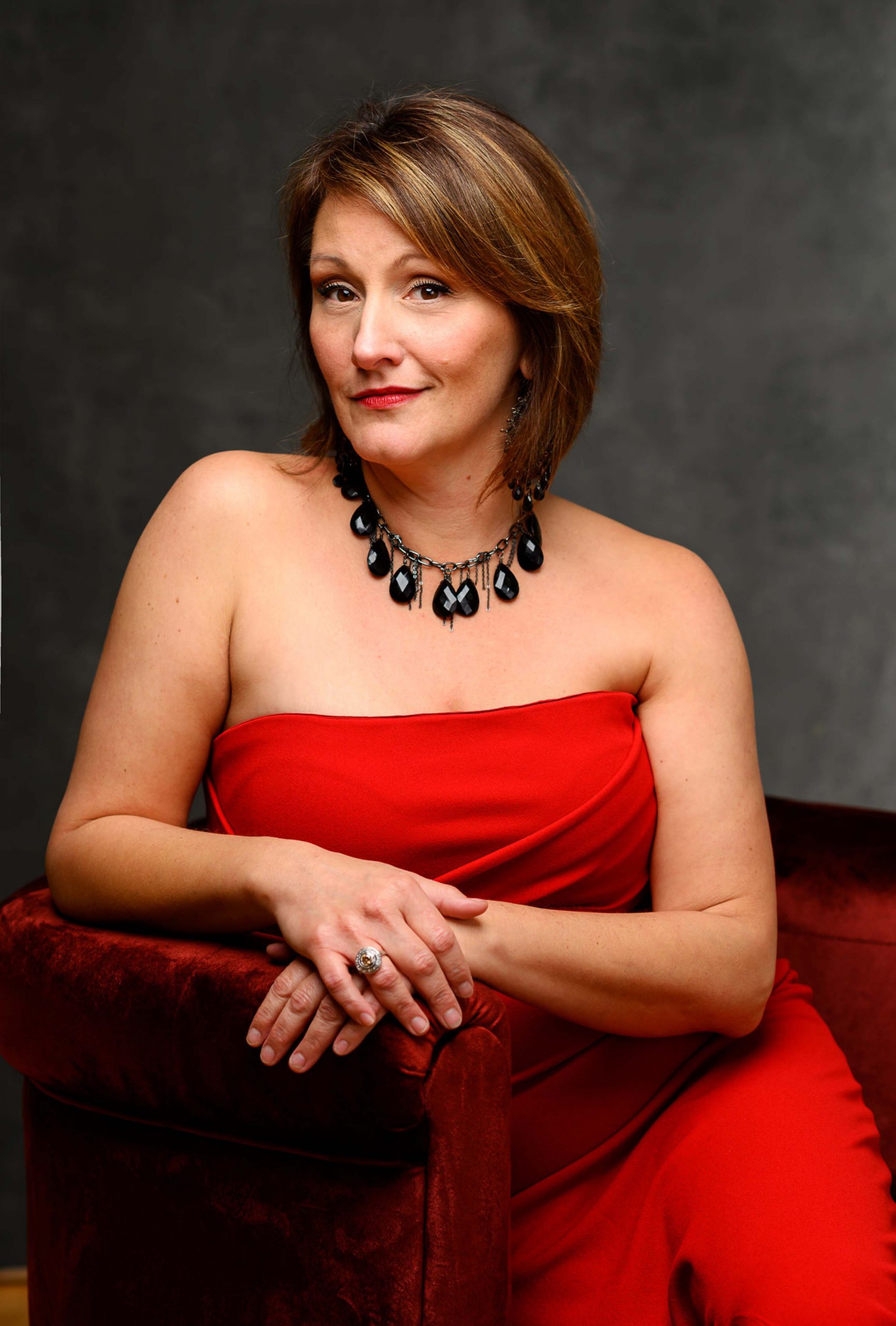 Known for her soaring voice and richly nuanced characters, soprano Carrie Hennessey is consistently thrilling audiences and critics in opera and concert appearances around the world. Ms. Hennessey’s much awaited debut in Previn’s A Streetcar Named Desire “gave us a Blanche that let us burrow into her character’s soul, even into the darkest crevices…Hennessey, using a one-two punch of music and drama, made it resonate in a way that equaled the finest stage performances of the part I’ve seen.” (Fresno Bee)  Ms. Hennessey’s embodiment of the title role in the West Coast Premiere of Tobias Picker’s opera  Emmeline earned her a Bay Area Broadway World Awards for “Best Leading Actress in a Musical” nomination. Praised for bringing her signature “exquisite vocal purity and range to the title role”and was “nothing short of sensational” (San Francisco Classical Voice). As Mimì in La Bohème, Ms. Hennessey “..possessed of a full, powerful lyric soprano, which delivers Puccini’s arias and duets richly. Her “Mi chiamano Mimì” (Yes, they call me Mimì) in Act 1 is gorgeous”. (San Francisco Classical Voice) On only one day’s notice, Ms. Hennessey made her debut with the Modesto Symphony Orchestra, as soprano soloist in Mahler’s Symphony No. 4, to great acclaim.

2020/2021 season includes a title role debut in Kát’á Kabanová by Leoš Janáček, Rose in At the Statue of Venus with Festival Opera and accompanied on piano by composer, Jake Heggie. Ms. Hennessey will also perform the world premiere of Bones of Girls by librettist, Cristina Fríes and composer, Ryan Suleiman, with The Rogue Music Project, a collective of performers that cultivates adventurous musical and theatrical experiences. Other performances include Beethoven’s Symphony No. 9, a recital with long-time collaborator Jennifer Reason of all female composers, “And Yet She Persisted: Stories and Music of Women in Classical Music”, chamber music featuring female composers with Chamber Music Society of Sacramento, as well as numerous recitals, chamber music and orchestral concerts, cabarets and continuous music education projects.

Previous performances include Britten’s War Requiem, Mahler’s Symphony No. 2 as well as debuts at the Concertgebouw in Bruges, in Ypres, Belgium and at the Liederhalle in Stuttgart, Germany singing the soprano solo in the Verdi Requiem. Alongside the world-renowned composer Ricky Ian Gordon in the fall of 2016, Ms. Hennessey gave Master Classes and performed a recital of his original art songs.

Ms. Hennessey directed the Sacramento Children’s Chorus their joint production in Brundibar with Sacramento Opera, is currently an artistic advisor to the board and mentor to the artistic staff. Ms. Hennessey continues to actively support music education through lectures, workshops and Master Classes in the communities in which she works, as well as nurturing a thriving private vocal studio. 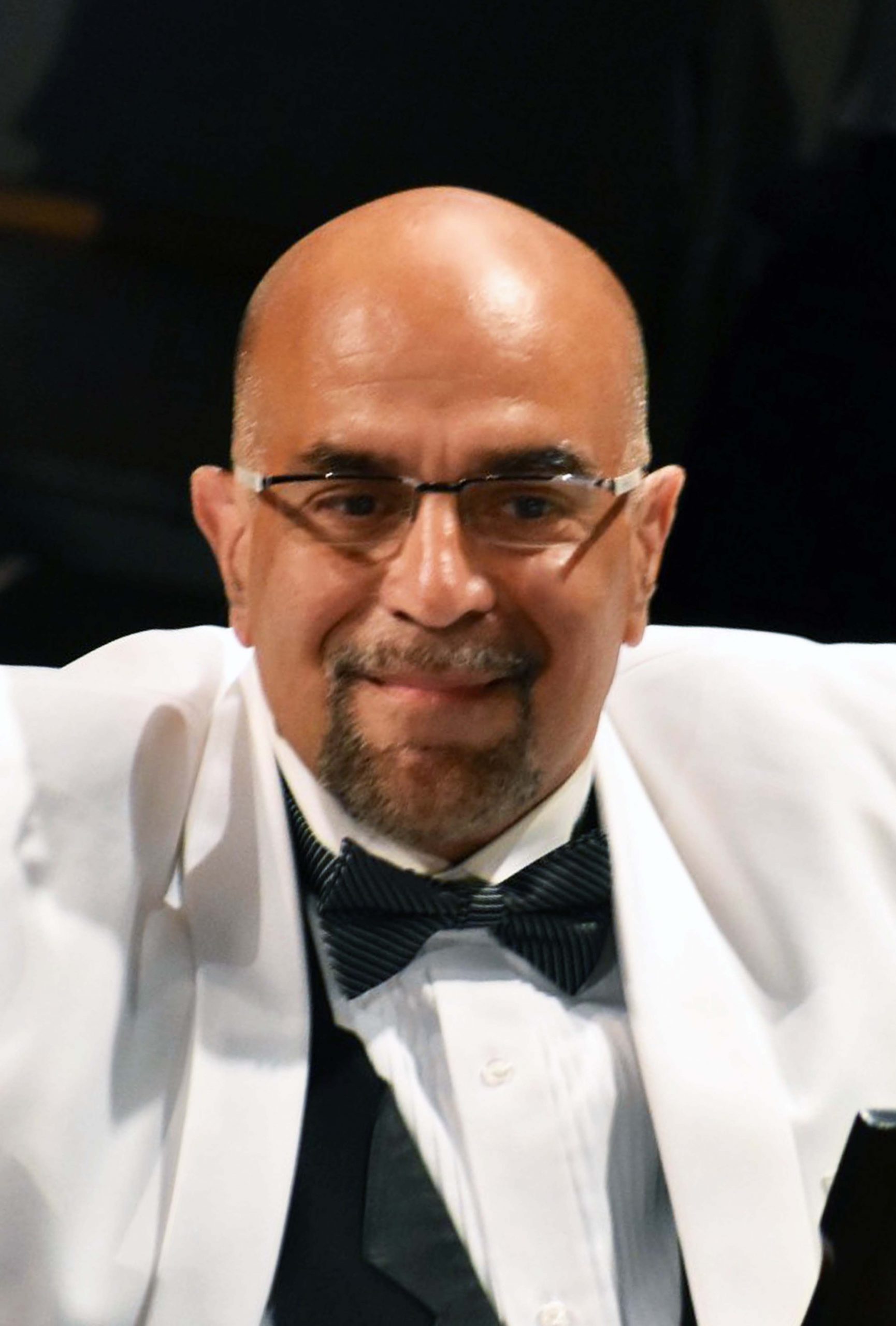 Patterson has recorded seven CD’s for Chérie Noble (Brio Recordings), five of which are his own compositions for dance. His arrangement of “My Regards” was performed by the Detroit Symphony Orchestra with Scott Thornburg as trumpet soloist.  Other groups that have performed his music include the Indianapolis Pops Orchestra and Blue Lake Festival Chorus. Besides his work in the classical sphere, Patterson has orchestrated several pop/rock/soul songs of the 1960s and 1970s for cover bands (keyboard, guitar, sax, brass, strings, bass, drums, vocals). Patterson has played for a number of Broadway touring shows, including Wicked, Anything Goes, The Color Purple, Chorus Line, Legally Blonde, Shrek, West Side Story, The Addams Family.

Tony began classical piano lessons at age three with his father, Richard Patterson. He made his solo debut at age eight, playing Mozart’s Concerto no. 28 with the Lima Symphony; then premiered “The Anthony Concerto” with them at age twelve, a piece composed for him by his teacher, Don Hurless. His teachers include Richard Syracuse, Jerome Rose and Earl Wild.

Tony was Artist-in-Residence at Alma College from 1995-2020 and faculty pianist at the Bay View Music Festival since 1986 where he has given hundreds of solo and chamber music performances. Patterson previously served on the faculty of the University of Charleston, West Virginia and Capital University. He is a CASIO Artist and Academic Consultant. 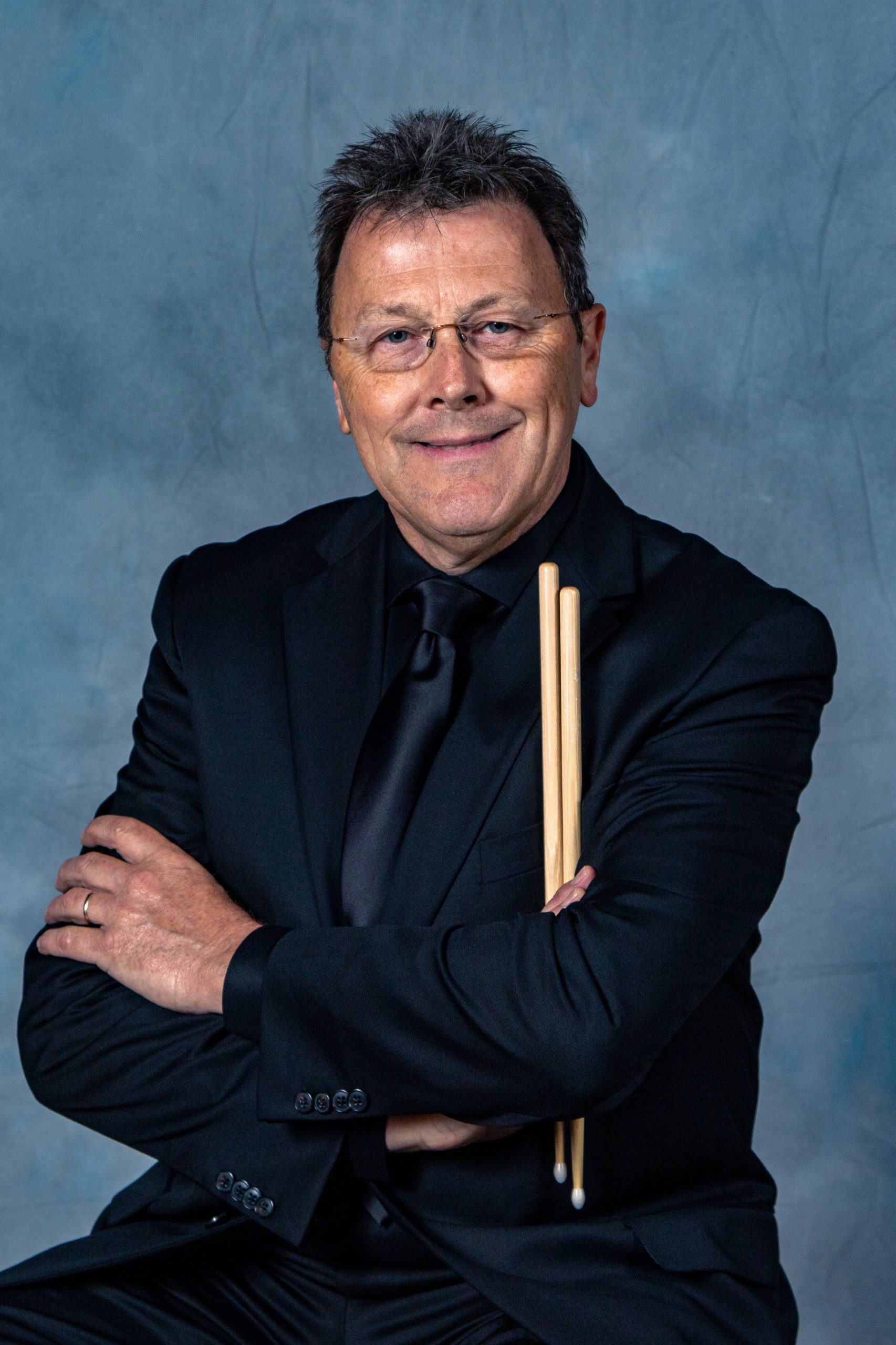 David Zerbe is the Paul Cameron Russel Professor of Music at Alma College, where he serves as director of bands and percussion studies. He was the recipient of the Faculty Barlow Award in 2013 and the Outstanding Faculty Award for the Humanities in 2011. A founding member of the internationally acclaimed DMP recording group the Robert Hohner Percussion Ensemble, he has performed John Mackey’s Concerto for Percussion with the Alma Symphony, as a soloist for the Flint Symphony’s performance of Carman Moore’s Gospel Fuse and as a percussionist with the Midland, Saginaw, Traverse City, and West Shore symphonies. He was also featured with the C.M.U. Jazz Lab 1 performance of Rob McConnell’s I’ve Got Rhythm at the Montreux International Jazz Festival and Buddy Rich’s Channel One Suite arrangement at the Elmhurst and Aquinas Jazz Festivals. An active free-lance musician, Mr. Zerbe has appeared with Aretha Franklin, Peter “Madcat” Ruth, Michael Feinstein, Marie Osmond, Harper and the Midwest Kind, Sharri Williams, Jive at Five, and for Rich Little. His Alma College Percussion Ensemble has been invited to perform 19 times at the Notre Dame Collegiate Jazz Festival, with vibist Joe Locke at the Port Townsend (Wash.) Jazz Festival and opened the 2009 Detroit International Jazz Festival sharing the Chase Main Stage with the Hank Jones Trio and Chick Corea, Stanley Clark and Lenny White. He is the lead drummer and arranger for the percussion section of the Alma College Pipe Band. Dave Zerbe is the founder and director of the “Legacy Percussion Orchestra” a professional percussion ensemble with a national membership, which was a headline act for the Lionel Hampton International Jazz Festival, John Clayton Artistic Director, on February 26, 2011. 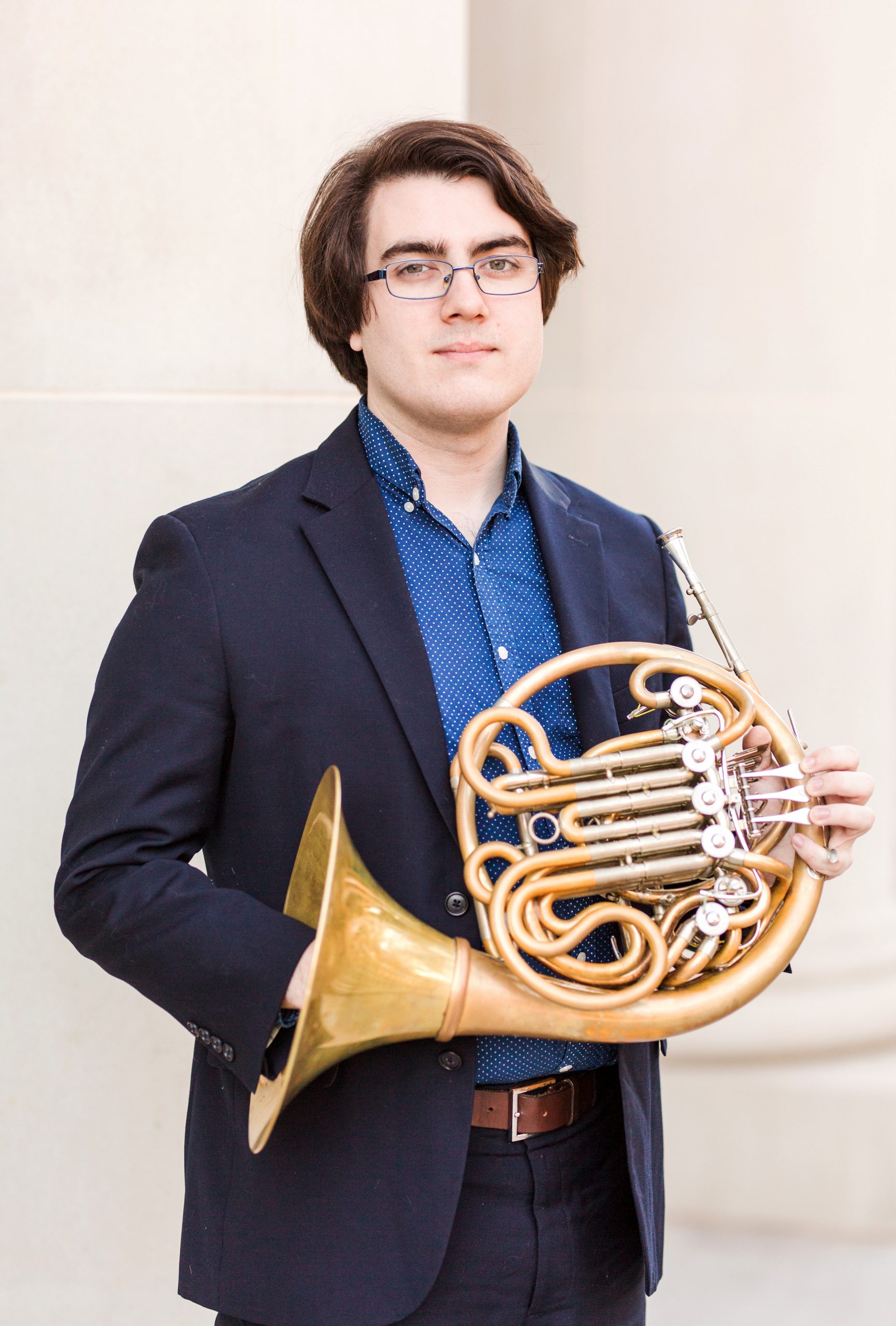 Scott Leger is a soloist, teacher, and orchestral horn player from Houston, TX. He currently resides in Miami Beach, where he is a Horn Fellow at the New World Symphony. Prior to joining New World, Scott held the position of Principal Horn of the Cayuga Chamber Orchestra in Ithaca. In addition, he has performed with The Florida Orchestra, and Omaha and South Dakota symphonies as a substitute musician, and has received fellowships to spend his summers at a variety of music festivals including the Tanglewood Music Center, National Repertory Orchestra, Norfolk Chamber Music Festival and National Orchestral Institute. In 2022, Scott joined the innovative chamber group, Spectrum Brass, where he will serve on the faculty of the Spectrum Brass Seminar and be an Artist-in-Residence at the Bay View Music Festival.

As a soloist, Scott has performed concerti with the Cayuga Chamber Orchestra and New World Symphony, and in the 2020-21 season, premiered a new arrangement of Eleanor Alberga’s The Shining Gates of Morpheus for horn and string orchestra with New World. Also, Scott has competed in international competitions, most recently receiving Second Prize in the University Division of the International Horn Competition of America. He received an Honorable Mention in the Woolsey Concerto Competition in 2017 for his performance of Oliver Knussen’s Horn Concerto, and in 2014 he performed Gordon Jacob’s Concerto for Horn and String Orchestra with the Meadows Symphony Orchestra at Southern Methodist University.

Scott maintains an online presence as an educator and teacher producing content for his YouTube channel and various social media platforms, Scott Leger Horn. As a producer, Scott presented over 20 concerts for the New World Symphony’s popular “Live from our Living Room” series, a free live-stream concert series produced by the NWS Fellows. Scott also produced “Spectral Sounds” for the New World Symphony, a concert series exploring the origins of spectral music, where he also was featured as a soloist in Tristan Murail’s rarely performed work memoire/erosion for solo horn and nine instruments. He enjoys using the internet to build classical music audiences and hopes to build a platform to inspire horn-players and musicians of all ages to enjoy their craft.

Scott completed his master’s degree at the Yale School of Music under the direction of William Purvis in 2018. He received his bachelor of music degrees in music education with certification and music performance at Southern Methodist University, with minors in music theory and mathematics, in the studio of Gregory Hustis.